From Bauhaus to Bow-Wows

Every day at 5 o’clock, a founding member of Academy Studios in Novato, California, breaks into his “joie de vivre dance.” Holding his butt low to the ground, Sully spins wildly in anticipation of the end of the work day. No mere office eccentric, Sully fills a role that is equal parts muse and merry prankster, and for that he is rewarded handsomely with chew toys and belly rubs. Nice work if you can get it, but you can’t – unless you happen to have a tail and four paws.

Sully is a yellow Labrador retriever, one of the many dogs whose daily presence is indispensable to architecture and design firms, where an informal office culture belies a vein-popping intensity best relieved by hurling a slobbery tennis ball across the room as a furry, panting pal gives chase.

“It’s so easy to get locked into a ten-hour day, focused on a deadline. It’s the dog who enforces the coffee and meal breaks. He gives you a reality check and larger perspective of the world,” says Dean Weldon, president/CEO of Academy, which designs and fabricates museum exhibitions.

Designers have always doted on their dogs. Aldo Rossi’s beloved miniature bull terrier made frequent cameos in his sketches and notebooks. The Italian writer-architect-polymath Curzio Malaparte kept his dachshund, Zita, tucked in his coat reverse papoose style. And when Le Corbusier’s pet pooch died, the enigmatic architect bound one of his favorite books, Don Quixote, in its hide, giving new meaning to “dog-eared” copy.

A tad macabre, but don’t underestimate the connection between creativity and canines. Several firms have even started featuring these esteemed employees on their Web sites. On Buchanan Architects’ site, a headshot and bio of “office mascot” Mamie, a rat-jack terrier puppy, can be found alongside those of the Dallas firm’s eight architects. According to the “team” page of Boston-based Hacin + Associates, Inc.’s site, Oscar, a miniature schnauzer, “feels most at home when surrounded by clean, modern design.” And at Flux Design in Milwaukee, a golden retriever—also named Oscar–is given the cryptic title of “security” on their Web site, although “if someone were to actually break into here he’d just want to play catch with them,” says president Jeremy Shamrowicz.

Not that Flux’s Oscar doesn’t take the work seriously. “He’s good at critiques,” Shamrowicz notes. “He’s not going to beat you up too hard, just give you the sad puppy face.”

Indeed, the arfitects earn their keep. Scarpa and Ledoux, long-haired dachshunds who spend their days skittering around the Chicago architectural offices of Doyle & Associates, have turned up as props in project photographs. And Meyer Davis Studio’s mascot, a miniature dachshund named Nessie Gogo (short for Tennessee and sadistic “Kill Bill” assassin Gogo Yubari), has a talent for picking samples. When she finds one she likes, she grabs it in her mouth and runs around the office. “You’ll be like, where’s that carpet sample? And then you’ll find it chewed up in a corner,” says [principal] Gray Davis, who adds that her greatest attribute is looking good – typically perched atop a cow hide pillow on a Thomas O’Brien chair.

(Curiously, dachshunds, the sixth most popular breed in the U.S., hold a special appeal for designers. Perhaps it’s the fact that wiener dogs are very well balanced in spite of their improbable proportions.)

Whether intentional or not, architects have a penchant for canine color schemes in fashionable palettes. Michael Graves blond Labrador retriever Sarah (who died recently) was a shade that matched the parchment-color walls of his Tuscan-style classical villa in Princeton known as “the Warehouse.”

Says David Hacin, “I can’t tell you how many times we’ve been picking colors for fabrics and clients will say, ‘I want something the color of Oscar — Oscar Gray.’”

Interior designer Harry Schnaper once had a client request a sofa the hue of his Vizsla Birdy’s “beautiful brown toenails.” Birdy is something of a celebrity around the D&D Building, where she loves to gallop around the carpeted halls (she has an aversion to bare floors) and greet everyone like a visiting dignitary. “She takes the tension out of a sticky situation, which in decorating is often,” says Schnaper, [president] of his eponymous firm. Her bird-dog “strike-a-pose” DNA makes her prone to vogueing, a decided asset in this business. “She makes a great decorative accessory.”

Besides having the right look, a design dog must “have confidence, walk with some bearing,” insists Karen Buchanan of Buchanan Architects. She adds that some knowledge of technology wouldn’t hurt. Mamie has been known to spring onto desks and speed dial clients who can be heard on the speaker phone saying, “Hello? HELLO?”

But short of going Cujo in cubicle land, there’s little they can do to get pink slipped. Take Mamie’s predecessor, Buster, a chihuahua/miniature pinscher mix. During Buster’s heyday as top dog, principal Russell Buchanan had a late morning meeting with a consultant, a renowned partier who arrived looking disheveled. As they took their seats in the conference room, Buchanan was overwhelmed by what he thought was a criminal case of hangover halitosis. Leaning back farther and farther to escape the stench, he noticed something under the table that made him freeze: A fragrant deposit of poop, courtesy of the office mascot. 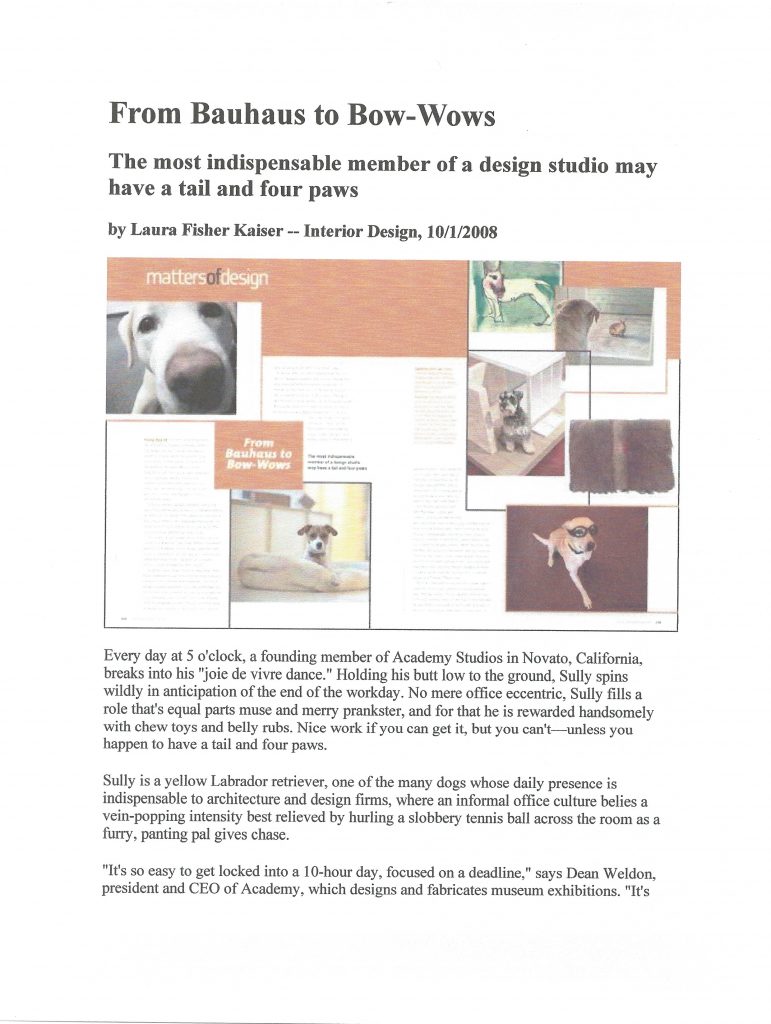